TaleGate Theatre Productions are working with Bafta winning author, Nicholas Allan, on a new musical adaptation of his best selling book ‘The Queen’s Knickers’ (Copyright, 1993) due to tour UK theatres in 2020.

‘TaleGate’ is known for its bouncy and colourful children’s musicals having previously found success with Allan’s books. Work includes West End run of ‘The Giant’s Loo Roll’ (Arts Theatre in 2016) and annual UK tours of ‘Father Christmas Needs a Wee!’ since 2013.

The original, award winning, book explores the Queen’s fashions with a cheeky wink to childish humour- “Everyone can see the Queen’s smart coats and dresses, but what does she wear underneath? Through the eyes of a little girl hoping for a school visit by the Queen, the range of royal underwear is revealed, in all its regal glory”

This new adaptation, by permission of Nicholas Allan, will see the same creative team come together including artistic director James Worthington directing and writing the book, Kate Lindsey on lyrics, Laura Bulless as choreographer, Jason Burns working on Orchestration and David Law as scenic designer.

Nicholas Allan commented “A musical of ‘The Queen’s Knickers’ should be one of sheer fun. The book has been a big seller for over twenty-five years: the combined subjects of Royalty and underwear of great curiosity to young children. Talegate Theatre, who’ve had such success with ‘Father Christmas Needs A Wee’, will use their creative genius, I’m sure, to maximum effect both in story and song for this new project. I’m looking forward to the result.”

Philip Ward, Managing Director of TaleGate Theatre Productions said “We have been working closely with Nicholas for several years and not only consider him a sheer talent in children’s literature but a close friend. This is an adaptation we have wanted to work on for some time and feel now is the right time as it will take TaleGate Theatre to new heights.”

The Queen’s Knickers will be available for a UK tour in the summer 2020. The production will once again be represented by freelance tour bookers- Book ’em Danno. For all tour enquiries please contact them on info@bookemdanno.com or call 01629 584 438. 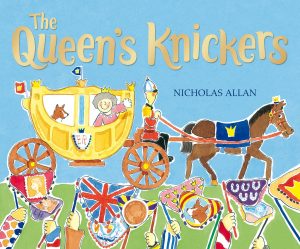